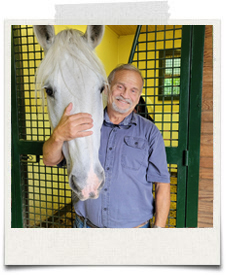 Marc was born in France and began riding there when he was six years old. Because of his constant complaining his instructor did not allow him to ride with stirrups for over one year. His parents soon bought him his first horse, but he was not allowed to ride her for the first year! She was a nutsy three year old mare named Diablesse. When he was thirteen years old, as a challenge to himself, he jumped a 6’ fence in England, at a trot from a paved road into a field. He cleared the jump successfully, then fainted shortly afterward, realizing what he had just done. At 14 years old Marc began to teach at the provincial Etrier Baugeois in the Loire Valley. From 1966-1967 Marc, now 15 years old, was a member of the French junior National 3 day Eventing Team, riding his father’s horse Othello-H. At 16 years of age Marc because the youngest certified Riding Instructor in France.

At age 22, Marc became the Co-Captain of the Israeli International Equestrian Team. The team rode older carriage horses trained to become jumpers at great psychological challenge to their trainers! The team only managed one trip internationally to neighboring Cyprus, where it was unfortunately defeated. At age 25 Marc was promoted to Head Instructor at the Tehran Imperial Club and remained there for two years. The Iranian instructors disliked him because he made them canter and jump facing the horses butt, which almost always resulted in them falling of the horse in front of friends and family of the pre-revolution Shah of Iran and his wife, the lovely Farah Dibah (whose favorite pastime was to watch Marc train his instructors).

From 1981-1995 Marc worked to found the Independent Riding Club of New York and New Jersey. The club consisted of over 200 members riding once weekly out of seven local riding academies. In 1986 Marc founded the Equishare USA franchise which he currently runs. He also currently owns and operates PonyShare Polite Ponies (PPP), which has introduced about 15,000 young people to ponies and horsemanship in their own towns for the last twenty-three years. In 2006 Marc won the bid to renovate and reopen Seaton Hackney Stables in Morristown, New Jersey which had been largely destroyed in a fire. In the last two years Marc has also started and co-owns with his wife Shelly, Price Publishing LLC. Marc lives in Morristown with his wife, two wonderful kids, six dogs, two cats, and pig Wee-Wee. 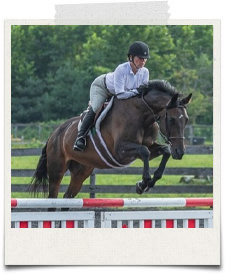 Edie has had a love and passion for horses from her first pony ride at age 4. Riding at a neighborhood farm triggered her life-long interest and pursuit of education and partnership with the horse. Her background includes attending Cook College Rutgers University for Advanced Equine Health Care, along with continuing education workshops and seminars to remain consistent with the most recent equine advances. Edie’s equestrian experience includes horse Ownership and competition which developed into working with and instructing junior and adult riders. with a love for teaching, she worked for many years at a Hunter/Jumper equestrian facility developing riders from the Beginner to the Intermediate and Advanced levels.

This was the touchstone for owning and managing her own Full-Service Boarding facility for nearly ten years. An accomplished competitor both in Equitation and Hunters, she has successfully shown to the “A” Level for Zone 2. Her broad embrace of “everything equine” includes Cross Country, Hunter Pacing, Cubbing, Lower Level Dressage Movements and trail pleasure rides. 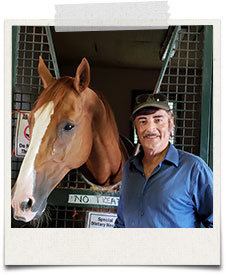 Frank Senner was born in Morristown, New Jersey, and currently resides in Bernardsville. Frank started riding when he was seven years old, studying the American forward seat system taught by George Morris. Frank soon started showing at in equitation. Later, as a teenager he competed in the Maclay. Frank earned a two year humanities and was a working student for Edith Master, studied combined training with Jane Richards, rode with Nona Garsons and Michael Barazones. Frank began teaching riding when he was 21 years old and has now been teaching now for over 20 years. In his teaching, his main focus has been the fundamentals of equitation. Frank has been an integral part of Seaton Hackney Stables for seven years. 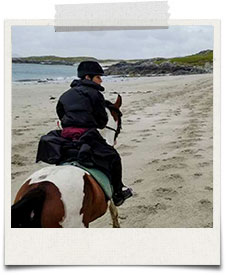 After a lifelong equestrian career, Maggie’s passion for horses and riding remains unabated. She is ready to share her extensive knowledge of all things equine with students of every age and level of experience. She believes that the fundamentals of good riding and horsemanship are the same whether you want to train a young horse, become a successful competitor, or enjoy trail riding confidently.
Her junior riding career included showing in the pony and junior hunter divisions as was competing successfully in the “Big Eq” a national level division for junior riders. As an adult she continued to show both hunter and jumpers.
Her experience includes starting many young horses, running a lesson barn and teaching. A long stint at an A + show stable gave her the opportunity to ride with the top notch trainers Barbara Soley (short listed for Canada’s Olympic Team) and Francesa Mazella. She also had a chance to clinic extensively with Olympic notables George Morris, Anne Kursinski, Joe Fargis, and Greg Best. Maggie also gets out on trails just for fun whenever possible and continues to ride and train. 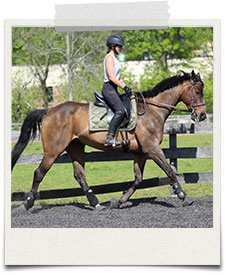 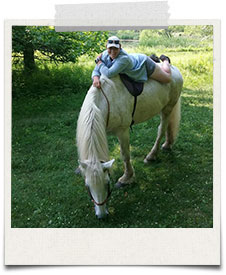 Elizabeth “Liz” Doerksen was born in Manitoba, Canada where she grew up with 13 horses. Liz started riding at the young age of three, taught by her father, a self-taught horseman. Liz was seven when she got her first horse, Beauty, a three year old Arabian-Quarterhorse mix. Beauty and Liz grew and learned together through many tough lessons and some even tougher falls, but always came back stronger together.

In 2006 Liz moved to the United States and currently lives in Clifton, New Jersey. Liz has over 25 years’ experience in horseback riding and has been teaching for five years, all of which have been spent with Seaton Hackney Stables. In both disciplines, English and Western, her main focus is balance and clear communication. Clear communication in a rider requires balance, a fundamental skill all riders need master. Clear communication as an instructor requires the right combination of encouragement and direction. Liz enjoys teaching beginners the basics and building the fundamental skills of riders at all levels. 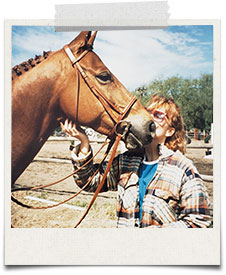 Connie grew up in Tennessee Walker and Quarterhorses. Attending college on a voice scholarship, she appeared in many musicals throughout the US but always found a local barn to run to.

Interested in all phases of equine work , Connie worked for several Hall of Famer Trainers as a groom in the Standardbred industry at Meadowlands Racetrack and several south Jersey training centers such as White Birch and Gaitway.

For the Country of Passaic while managing that facility she created a Therapeutic Riding Program as well as a Trail Riding and Summer Camp Program. While managing West Milford Equestrian, She ran all the Dressage and Hunter Jumper Shows for that facility.

And now LOVES it as an Instructor at Seaton Hackney! 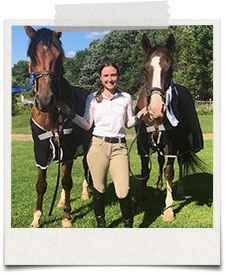 Two friends and I decided to go horseback riding and we were looking for a stable in Northern NJ. While there were a few in the area, we chose Seaton Hackney and had a great time. When you call to set up your ride in advance, they prep you extremely well and set great expectations. It didn't feel commercial what so ever, and we always felt we were in great hands. Our instructor Jen was AWESOME, always making sure we were good but also empowering us to ride. Price was pretty decent for a group, less expensive than other stables in the area. The trail was pretty and actually public, so a bunch of people were so happy to see us. Every point of contact was very welcoming, and I will definitely be coming back here.

I would like to thank you and your staff for the time you dedicated to our kids. It was such an incredible day all around and you just topped it off for them. They loved the horses. Your staff and your kindness is so greatly appreciated. We will be sending an email to all the parents of the students that participated to give them your name and phone number of your stable. Thanks again and if there is ever anything we can do to help you as a organization please ask. The Lions club and Leos club would gladly help.
Barbara G.

Looking forward to it! Jillian is proudly riding in your groups for children with special needs and we continue to be very grateful of your support and for giving our daughter a place where she feels like she belongs!

My son Anthony “AJ” Laska attended pony share camp at Alverthorpe Park in Abington, Pennsylvania from July 7-10, 2014. I have to tell you how impressed I was with the program and the staff. Fernando was very organized and kept the program moving at a good pace. I loved how he taught them the basic safety rules, which is not easy with younger children. Emily, Luisa, and Hector were FANTASTIC too. They really made the activities enjoyable and fun. My son was one of the youngest children there, and they were so kind and patient with him. The staff demonstrated their knowledge of the horses and took good care of them. They also made sure that each child had time to ride. As a mother, I was just so delighted and thrilled with the program that I can’t wait to enroll him again next year! So a big “thank you” again to Fernando, Emily, Luisa, and Hector for a wonderful week.

I was one of your first Equishare riders back in the mid ’80s. My horse was DJ. I am still thankful for the training you gave me. I still ride for pleasure and enjoy watching my daughter ride who is starting to show and is part of the USEF High School Equistrian Athlete Program. Looks like you are doing amazing work with children in NJ. Wish you all the best for a great 2015.

My daughter has always had a wonderful experience at Seaton Hackney, the staff have never been anything but welcoming, the horses are wonderful and Kaylea loves them all. We have tried other barns, but as a beginning family we were not welcomed at other barns as much as we have been at SHS. Thank you for all you do for your riders and horses!

Seaton Hackney has helped me become the rider that I am today, especially Michele Grimm. Michele is fun but focused on my safety. I have ridden with her since I was 4 years old.I like to go to horse shows and enjoy the Barn shows in the fall and spring. I also had fun at Seaton Hackney at camp this past summer.

I have learned responsibility of taking care of the horse and the tack. Riding has helped me learn about competition and both winning and losing.

I love the stables because I get to ride my horses and it’s fun. I also like grooming the ponies. Elvis always remembers who I am and licks my hand. He’s fuzzy and cute.

As the dad of a young lady that rides at Seaton Hackney, I could not agree more about the quality of the facility and of the instruction they provide.

Seaton Hackney Stables has changed my life. I can honestly say that without the joy of horses, I would have gone through life with an emptiness that I didn’t even know existed. The horses and the staff are part of my family. It’s an amazing facility with quality instructors and horses.